Pivot points the short-term players cannot give up on are very convenient technical analysis tools used to determine the resistance and support points the parity will face in the short term.
The calculation of the pivot points is executed with the help of a few simple equations. First, the average of the lowest, highest, and closing prices of the relevant session is taken.
It means:
Pivot Point (PP)
The support and resistance levels are then calculated as follows:
First Support (S1)
First Resistance (R1)
The second possible support and resistance levels following initial support or resistance are calculated as follows:
Second Support (S2)
Second Resistance (R2)
Did these calculations scare you? Don’t worry. Your trading platform automatically calculates these from the point you select and places them in the chart. It calculates the pivot point PP (pivot point), the resistance points R (resistance), and the support points S (support).
Below is an example of the pivot points specified in the 1-hour EUR / USD price chart. 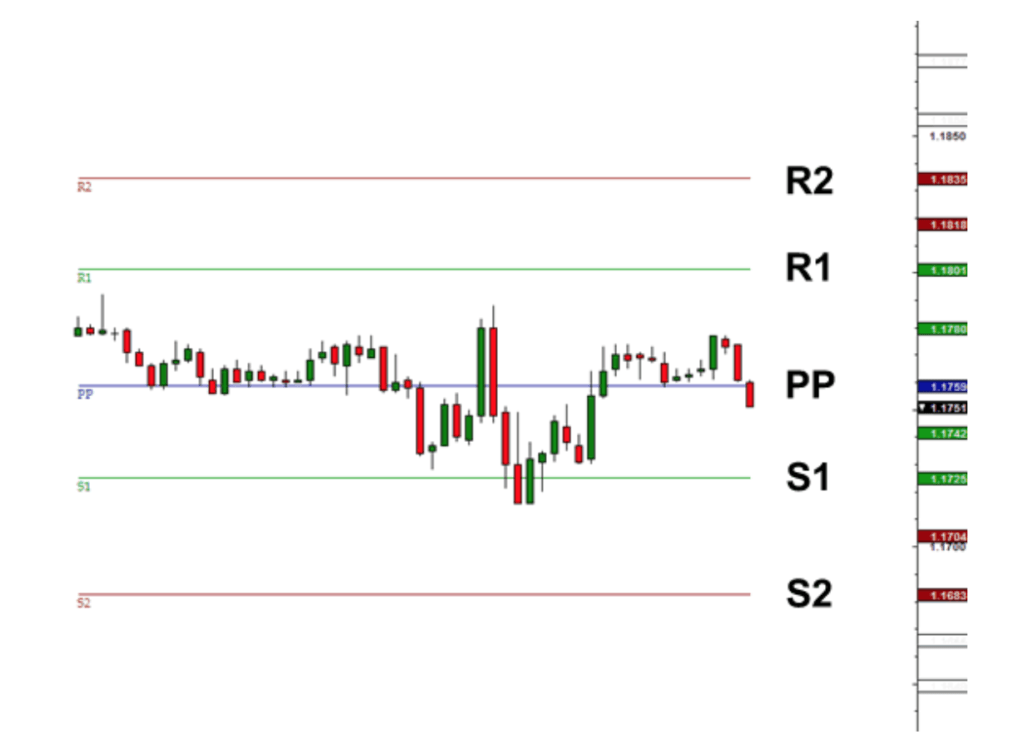 Transacting by using Pivot Points
Pivot points are not used in long-term graphics. They are kind of analysis preferred by day players who play more through short-term investments, or who do not invest more than a few days.
First of all, the pivot point we call PP is our main idea center. We agree that prices will be at this level. If prices continue on the PP, we think there is a rising trend. If there is a lowering trend if it continues down. For this reason, in general, the prices outside the pivot point without strong interference from the outside try to sit. Therefore, we can assume that by reaching the resistance or support, a pair will be retracted to the pivot point.
Now let’s take a look at the following example and how we can earn money in this way which is called a toll player.

In our example, the pivot point initially worked as a natural support. (See the orange field) A strong movement then breaks down the point and quickly draws down the parity. (First magenta field) Scalping players who can break the support can get a short position in this direction and gain profits of 20-30 pips. After this point, the parity is still trying to return to the pivot level and pass the pivot to the other side as soon as it is rising rapidly. (Second magenta field) This is a short investment opportunity. The parity, which cannot reach the first resistance, is desperate and continues down the pace.
As soon as it passes the pivot point, there is an investment opportunity in the downward direction. (Same magenta field) The parity then returns to the first support level the computer automatically draws as predicted. (Line S1) This line may be an investment opportunity for players who take slight risks. Then the parity goes up again by cutting the PP point once more and the pivot point is advancing for a while by choosing self-support. (Pink field) Then the parity cutting the pivot point down (Yellow area) continues after some time, then goes over with the S1 resistance in a large noise and goes down quickly. (Gray area) This is also a good investment opportunity. The parity is discovered and predicted to be down to the second level of support called S2 and starts to return from there.
As you can see, in 3-4 days, the investor who knows his work and is patient has had the opportunity many times. The investor now can have a new start and continue his path by deleting these pivot lines after he places his dollars in the vault.

Yes, You Will Get Arrested For Attacking An Inanimate Object